- December 02, 2016
Law librarians do similarly creative work as lawyers, so a computer program like ROSS won’t be able to replace us in the near future. That being said, there may be a time in the future when computer programs will be more adept at many of our tasks.

There are three main levels of natural language processing:

Computer science experts and philosophers have estimated a processing curve based on where computers are now and when computers will master pragmatic natural language processing. 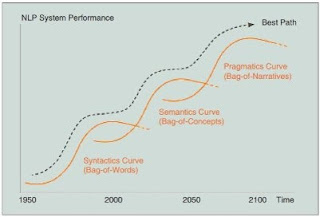 Based on the curve, we see that computer programs are currently at the end of the syntactics curve and are just beginning the semantics curve (think Siri). We still have a long way to go before computers do the high level pragmatic natural language processing, with estimates being close to year 2100 and beyond.

Even when a computer program starts to do pragmatic-level natural language processing, it will still take time for it to master and emulate what the human brain can do on the pragmatic front. The more low-level tasks of lawyers and law librarians will go quickly (think finding a case by citation or party name).

But the high level, context driven, creative tasks will take much more time for computers to master. We may inevitably need fewer lawyers and law librarians over time, but AI will mostly work to augment our human brains. Personally, I would love them help.

What we all must be cognizant of is the notion of "premature disruption" – losing valuable players (lawyers and librarians) before the technology is truly ready to replace them. ROSS, for example, is really good at PR, but stakeholders must be careful to avoid premature disruption. ROSS is a great tool that will augment lawyers and librarians, but it will not replace us. And it won't replace us for the foreseeable future.

It's important that we all arm ourselves with this information so that the various stakeholders understand AI's current capabilities. I will spend December & January finalizing a full-length piece on this topic. More to come...