Showing posts from June, 2016
Show all

Charting History Through an Internet Archive

- June 27, 2016
Librarians and archivists are currently in an ongoing conversation about preserving digital content. What we're finding is that some of the most clever commentary on pop culture and politics is thriving deep in hashtags on Twitter. Social media is as essential to understanding the preoccupations and temperature of our time.  But preserving materials from the internet is much harder than sealing them under glass.  Building an [internet] archive has always required asking a couple of simple but thorny questions: What will we save and how? Whose stories are the most important and why? In theory, the internet already functions as a kind of archive: Any document, video or photo can in principle remain there indefinitely, available to be viewed by anyone with a connection. But in reality, things disappear constantly. Search engines like Google continually trawl for pages to organize and index for retrieval, but they can’t catch everything. And as the web evolves, it becomes harder
Post a Comment
Read more

- June 20, 2016
The term "library anxiety" has existed in the professional lexicon since 1986 when " Library Anxiety: A Grounded Theory and Its Development ” by Constance A. Mellon was published in the March issue of College & Research Libraries. Librarians have been discussing the general phenomenon since at least the mid-to-late 1970s, says Ann Campion Riley, president of the Association of College & Research Libraries, but it was Mellon who first gave it a name three decades ago. Her original study was based on analysis of journal entries college students had been required by their instructors to keep during the research process. After reading the student diaries, Mellon concluded, “Seventy-five to 85 percent of students in each class described their initial response to the library in terms of fear or anxiety.” Essentially, the term describes  the feeling that one’s research skills are inadequate and that those shortcomings should be hidden. In some students it’s manifes
Post a Comment
Read more 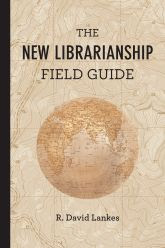 As I finish drafting a book chapter on the philosophy of a Millennial leader's role for the forthcoming  Millennial Leadership in Libraries (Hein 2017), I was lucky to run across a new book by R. David Lankes called The New Librarianship Field Guide . My chapter centers around a discussion of Millennial attitudes toward careers, including working for a socially conscious company, and how those attitudes shape the Millennial library leader's role for leading well into the future. The New Librarianship Field Guide "reminds librarians of their mission: to improve society by facilitating knowledge creation in their communities." To this end, the book provides the "tools, arguments, resources, and ideas for fulfilling this mission." As noted, "this guide is a part of a larger conversation about librarianship, one that gives rise to new tools, new resources, and new ways of convening all the time." To be part of this conversation and find vid
2 comments
Read more

- June 08, 2016
In yet another article expounding on the virtues of law librarians, Australia's Lawyers Weekly notes that   [While] digitisation ... changes the format of information, the underpinning need remains for the skill set and value add which law librarians bring to law firms as well as our courts and law schools. In the law firm setting, not only do law librarians perform expert, efficient research, they are  often also responsible for maintaining knowledge repositories of high-quality legal documents produced by their lawyers. Law librarians are often also responsible for their organisation’s intranet and to integrate the information systems and tools required in a modern knowledge organisation. Not only are law librarians still relevant, so are print books. This is especially the case for many mid-tier firms, to which Australian legal publishers are yet to offer viable models enabling such firms to purchase lendable e-books. While we utilise our online services extensively and
Post a Comment
Read more

The Law Librarians of Congress blog  In Custodia Legis  recently announced  that Thomas.gov will officially retire as of July 5, 2016. Thomas.gov was launched on January 5, 1995, after Congressional leadership directed the Library of Congress to make federal legislative information freely available to the public. On September 19, 2012  Congress.gov  was introduced to eventually replace Thomas.gov with a more robust, updated system. Congress.gov's beta label was removed in September 2014, and it is set to officially replace Thomas.gov as the official website for U.S. federal legislative information. Congress.gov provides access to accurate, timely, and complete legislative information for Members of Congress, legislative agencies, and the public. It is presented by the Library of Congress (LOC) using data from the Office of the Clerk of the U.S. House of Representatives, the Office of the Secretary of the Senate, the Government Publishing Office, Congressional Budget Office
Post a Comment
Read more

The "Internet" is Over

- June 01, 2016
The NYTimes announced that it will join the Associated Press this week to change their style rule to lowercase the word "internet." As noted, "while most publications capitalized the word when it first came into widespread use, the lowercase form has become steadily more common in recent years." Changes like these provide insight into how style and usage can change over time: More broadly, modern usage tends to favor less capitalization — along with fewer hyphens and less punctuation in general. Capitalizing words when it isn’t strictly necessary can seem archaic to contemporary readers. The Times used to capitalize “Federal” in phrases like “a Federal judge,” and even “Government” when referring to the national government. Now both of those uses would be lowercase under our rules. Click the link to purchase the full NYTimes style & usage manual.
Post a Comment
Read more
More posts