Showing posts from January, 2016
Show all

- January 29, 2016
The Chronicle's Vitae blog  has an interesting post on post-promotion clarity. The author describes the process of being a part of the law school pecking order. From her article: I thought about the 80-hour weeks I’d spent at a job I did not love — or even like. But I also remembered how much I used to like it. I used to be the very best at it. But gradually my days had become filled with managing the nonsense of thoughtless, even mean, tenured faculty who saw me, my position, and my “lesser” status as a way to get their bidding done. Some viewed me a handy target for their anger, someone to stomp on just to make themselves feel better. I thought about how the work I did was, at best, 50 percent thankless. I thought about how even though I was ostensibly being “promoted” to “associate professor,” there was the important word “clinical” in front of that title — representing not only my lack of tenure but also my untenurable status. My 50 bosses were never going to let me i
Post a Comment
Read more

- January 26, 2016
Our profession's resident awesome law librarian Sarah Glassmeyer is currently a fellow at Harvard's Library Innovation Lab, and she just released an important census of state legal information .  Why perform this census, you might ask? For a variety of reasons, as Glassmeyer points out : First of all, the United States is facing an access to justice crisis in its legal system.  A 2005 study by the Legal Services Corporation showed that 80% of the civil legal needs – legal needs in which there is no constitutionally guaranteed right to an attorney –  in the United States are going unmet.  The United States ranks 66th out of 98 countries in a ranking of access and affordability of civil legal services.  Individuals are relying on self-help resources, either provided by a library or the web. Secondly, due to the relative ease of web-based publishing, states are increasingly making the Internet the primary place of publication for their legal information materials.  In re
Post a Comment
Read more

- January 25, 2016
The NYTimes highlighted a nifty new tool for searching over a million college syllabuses called Syllabus Explorer . Over the past two years, the Open Syllabus Project (based at the American Assembly at Columbia) have collected more than a million syllabuses from university websites. [They] have also begun to extract some of their key components — their metadata — starting with their dates, their schools, their fields of study and the texts that they assign. Open Syllabus Projects hopes that their tool will enable people to learn new things about teaching, publishing and intellectual history. At present, the Syllabus Explorer is mostly a tool for counting how often texts are assigned over the past decade. There is something for everyone here. The traditional Western canon dominates the top 100, with Plato’s “Republic” at No. 2, “The Communist Manifesto” at No. 3, and “Frankenstein” at No. 5, followed by Aristotle’s “Ethics,” Hobbes’s “Leviathan,” Machiavelli’s “The Prince,” “Oedi
Post a Comment
Read more

Studies Show We Should Practice Deep Reading On Paper 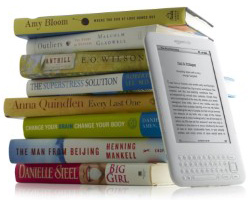 As we start to learn more about how we digest bring and digital material, we are finding that our brains process digital reading very differently. PRI reported that neuroscience, in fact, has revealed that humans use different parts of the brain when reading from a piece of paper or from a screen. So the more you read on screens, the more your mind shifts towards "non-linear" reading — a practice that involves things like skimming a screen or having your eyes dart around a web page.  They call it a "bi-literate" brain. The problem is that many of us have adapted to reading online just too well. And if you don’t use the deep reading part of your brain, you lose the deep reading part of your brain . To keep the deep reading part of the brain alive and kicking, researchers recommend setting aside some time each day to deep read on paper. Educators need to keep this in mind as we choose the required texts for our courses. We know that our students are getting e
Post a Comment
Read more

- January 18, 2016
The Guardian recently reported on a new best practice in libraries to purge user data in the name of privacy. As use of the law to acquire patron records since the Patriot Act has increased, librarians have become some of the US’s foremost experimenters in data security. Now they’re doing something even the most security-conscious private firm would never dream of (but have often been encouraged to do by security experts): purging sensitive information in order to protect their users. For example, the Graduate Center at the City University of New York did something very few private companies would ever do to protect its users’ privacy: it quietly began to purge its interlibrary loan records. “This policy change is motivated by the idea that libraries should not keep more information about their users’ requests than necessary,” wrote Beth Posner, head of library resource sharing at the school. As mentioned in the article, the information may sound harmless. But Polly Thistlethwa
Post a Comment
Read more

- January 15, 2016
Head on over to the RIPS Law Librarian Blog to see my recent post on law library collection development practices!
Post a Comment
Read more

- January 13, 2016
Generally, faculty like to use scores on student evaluations of teaching (SET) as a strong factor in hiring decisions because it is an "objective" measure while so much of tenure and promotion rests in the gray area. Did she publish enough? Maybe. Did she do enough service? Maybe. Were her teaching evals good? Yes or no. More recently, SET has come under fire. InsideHigherEd highlights a new paper that argues that SET are not only unreliable in evaluating teaching effectiveness but SET actually gauge students' gender bias and grade expectations better than they measure teaching.  There’s mounting evidence suggesting that student evaluations of teaching are unreliable. But are these evaluations, commonly referred to as SET, so bad that they’re actually better at gauging students’ gender bias and grade expectations than they are at measuring teaching effectiveness? A new paper argues that’s the case, and that evaluations are biased against female instructors in par
Post a Comment
Read more

- January 11, 2016
By the time students enter law school, they have learned a lot over the years about research and writing. This means it can take some convincing to tell them that what they've learned is "wrong." See this list of 11 grammar rules that make no sense. An InsideHigherEd article resonated when the author spoke of the reasons he cannot prepare students to write their ______ papers. So, some thoughts on why I cannot effectively prepare students to write their (history, philosophy, sociology, economics, political science, whatever) papers. One of the biggest reasons students have a hard time writing analysis and argument is because they often don’t have sufficient subject and domain expertise about what is being argued. They can describe what someone else says, but don’t yet have the knowledge to build upon that information. I see this time and again in the analytical research papers I assign as students struggle to insert their ideas into debates they’re not yet prepar
Post a Comment
Read more

- January 06, 2016
There's a new online newspaper aggregator in town. It's called Elephind . From the website : The goal of Elephind.com is to make it possible to search all the world’s online historic newspapers from one place.  With Elephind.com it is now possible for family historians, genealogists, and researchers to search historic digitized newspaper archives from around the globe. Elephind.com is much like Google, Bing, or other search engines but is focused on only historical, digitized newspapers. It enables you to search, for free, across many newspaper sites simultaneously, rather than having to visit each site separately. By clicking on the Elephind.com search result that interests you you'll go directly to the newspaper site which hosts that story. Many of the smaller newspaper sites are not well known and may be difficult to find with the usual search engines but are searchable from Elephind.com. Elephind also provides useful information for maximizing searches , includ
Post a Comment
Read more

Can Robots Be Lawyers? Not So Fast.

- January 05, 2016
The NYTimes Bits Blog highlighted an interesting new study on automation and lawyering. As the article noted, the fate of lawyers has been seen as a harbinger of a broader wave of worker displacement. The rapid commercialization of a new generation of artificial intelligence-derived technologies has led to concerns that technological disruption will extend from white- and blue-collar occupations of largely routine work that can be automated, into highly-paid professions like legal workers and doctors. This has mostly been anecdotal speculation ( really since the 1950's , but who's counting?). Until now, that is, when we finally have some reputable research to work from. In November, for example, a study prepared by McKinsey & Company suggested that adding technology to the workplace is more likely to transform, rather than eliminate, jobs. This echoed a growing consensus that it is important to distinguish “task” automation from “job” automation. The McKinsey study fo
Post a Comment
Read more

New Book: A People's History of the American Public Library 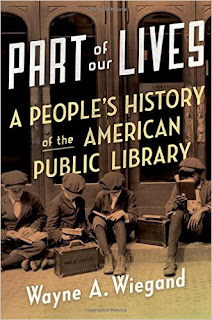 You've gotta love a good "people's history." In my formative undergrad years, I remember working at a local bookstore and being exposed to Howard Zinn's A People's History of the United States . It. Blew. My. Young. Mind. And now a law librarian colleague (Thanks, Randy!) has brought a new "people's history" to my attention. It's called Part of Our Lives: A People's History of the American Public Library . Despite dire predictions in the late twentieth century that public libraries would not survive the turn of the millennium, their numbers have only increased. Two of three Americans frequent a public library at least once a year, and nearly that many are registered borrowers. Although library authorities have argued that the public library functions primarily as a civic institution necessary for maintaining democracy, generations of library patrons tell a different story.  In Part of Our Lives , Wayne A. Wiegand delves into
Post a Comment
Read more
More posts