Showing posts from October, 2015
Show all

- October 29, 2015
The NYTimes ran an article yesterday about Harvard Law Library working to digitize a vast trove of cases.

Shelves of law books are an august symbol of legal practice, and no place, save the Library of Congress, can match the collection at Harvard’s Law School Library. Its trove includes nearly every state, federal, territorial and tribal judicial decision since colonial times — a priceless potential resource for everyone from legal scholars to defense lawyers trying to challenge a criminal conviction.

In what some librarians may see as a controversial move, the Harvard librarians are slicing off the spines of all but the rarest volumes and feeding some 40 million pages through a high-speed scanner. They are taking this once unthinkable step to create a complete, searchable database of American case law that will be offered free on the Internet, allowing instant retrieval of vital records that usually must be paid for.

- October 28, 2015
The Atlantic ran an article recently that is near and dear to the heart of Scribes --The American Society of Legal Writers' mission (disclosure: I am executive director of the organization). The article works to promote plain language.

As noted, the problem of needlessly complex writing—sometimes referred to as an “opaque writing style”—has been explored in fields ranging from law to science. Yet in academia, unwieldy writing has become something of a protected tradition.

Take this example:
The work of the text is to literalize the signifiers of the first encounter, dismantling the ideal as an idol. In this literalization, the idolatrous deception of the first moment becomes readable. The ideal will reveal itself to be an idol. Step by step, the ideal is pursued by a devouring doppelganger, tearing apart all transcendence. This de-idealization follows the path of reification, or, to invoke Augustine, the path of carnalization of the spiritual. Rhetorically, this is effected throug…
Post a Comment
Read more

Library As "Clinic Of The Soul"

- October 27, 2015
The NYTimes ran an interesting piece over the weekend discussing the reinvention of libraries.

[T]he principal danger facing libraries comes ... from ill-considered changes that may cause libraries to lose their defining triple role: as preservers of the memory of our society, as providers of the accounts of our experience and the tools to navigate them — and as symbols of our identity. In the United States, while the number of libraries that have disappeared is not remarkably high, public libraries have seen their budgets cut, their stocks culled, their staffs reduced and their opening hours shortened.

Librarians today are forced to take on a variety of functions that their society is too miserly or contemptuous to fulfill, and the use of their scant resources to meet those essential social obligations diminishes their funds for buying new books and other materials. All these activities are good and useful, and may grant libraries a central role in society once again, but we must be pr…
Post a Comment
Read more

The Library - A New Short Film

- October 26, 2015
The Library from Jason LaMotte on Vimeo.
The backdrop of this story takes place in a beautiful library that invokes the idealized view of libraries that most librarians hold dear.

From the director: The story told in The Library initially came from wanting to explore the relationship between memory and place. I have strong recollections of my neighbourhood library in Houston, Texas in the US. I can recall the layout, where certain sections of books were, the smells, and the sounds.

Google Books Sufficiently Transforms To Be Deemed Fair Use

- October 22, 2015
Many outlets, including The Chronicle of Higher Ed, note that Google Books recently received another big win in favor of fair use. The U.S. Court of Appeals for the Second Circuit handed Google another victory on Friday in a high-profile case about copyright infringement, declaring that its scanning of books as part of the Google Books project constitutes fair use. In its ruling, a unanimous three-judge panel of the court upheld a federal judge’s 2013 ruling against the Authors Guild, which sued the tech giant in 2005.

As The Atlantic notes, "the Google Books case had seemed to drag on forever: The Authors Guild first filed suit 10 years ago. But the theory behind the eventual ruling was a quarter-century in the making."

In 2004, Google began scanning books—copyrighted and non-copyrighted alike—in academic libraries with the plan of making portions of that material available online for free. Users of Google Books now know how this works: You can search Google’s scanned-book da…
Post a Comment
Read more 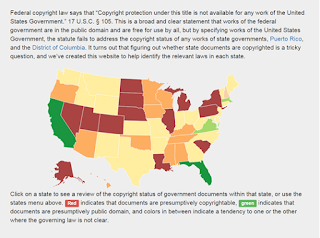 Harvard Library has created an interactive map of the copyright policies in all 50 states. The map is color coded for openness.

Federal copyright law says that “Copyright protection under this title is not available for any work of the United States Government.” 17 U.S.C. § 105. This is a broad and clear statement that works of the federal government are in the public domain and are free for use by all, but by specifying works of the United States Government, the statute fails to address the copyright status of any works of state governments, Puerto Rico, and the District of Columbia. It turns out that figuring out whether state documents are copyrighted is a tricky question, and we’ve created this website to help identify the relevant laws in each state.

If you click on the individual states, along with the openness score, you will find:
The copyright status (red for copyrightable, green for presumptively public domain)Binding lawAdvisory sourcesRelated lawSpecific examples of what the…
Post a Comment
Read more

How To Ask For Feedback On Writing

- October 15, 2015
A post over at Vitae, a Chronicle of Higher Education blog, gives pointers to academic writers on getting a useful critique.
In anticipation of the first draft conferences with my international LL.M. students, I couldn't help but wish that they knew this information. The writing coach noted that the writer should reflect on what he or she really wants to know about specific aspects of the piece.
In short, the first step to getting helpful feedback is to define your reader’s job. For example, are you wondering how you might expand the discussion section of your draft? Are you uncertain whether its current organization logically supports your thesis? Are you thinking you need more context to set up your argument? Do you suspect a certain point needs further explication?
Many students come to draft conferences with the notion that they did their (half-hearted) part; now it's the professors turn to tell them how to completely improve their paper to get an A. And when that doesn&#…
Post a Comment
Read more

- October 14, 2015
There is an interesting thread running on the AALL My Communities email list regarding West Library Maintenance Agreements (LMA).

Responses to Leaving Your LMA “Survey”

This posting appears to have hit a raw nerve in the US law librarian community. I received approximately seventeen responses from law firm, court/government, and academic law librarians. Out of the seventeen, two law libraries have already left their LMA contracts. But, many of you have contemplated doing so. Several of you mentioned that they decided not to cancel their LMA because they received as much as a fifty percent discount on their contract, or they did not cancel because they were concerned about the extra paperwork and hassle of reconciling invoices and monthly statements if they did NOT keep their LMA intact.

The common concerns I saw threading through the attached comments were these:

LMA is not flexible enough for me.We need to reduce as much print as possible, but if we reduce any fur…
Post a Comment
Read more

Proposed Legislation Regarding Librarian of Congress

- October 13, 2015
With the recent retirement of James Billington as the Librarian of Congress, the United States is set to get its first new Librarian in nearly three decades.

The current librarian, James Billington, has held the title since his appointment by President Reagan in 1987. Though named by the president and confirmed by the Senate, the Librarian doesn’t change with every new White House. After being appointed, Librarians are free to serve as long as they want—that’s why there have been only 13 of them since 1802.

In other words, this will be the first time a new Librarian has been appointed since the invention of the web. 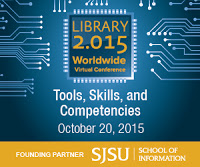 Library 2.015 is all day on Tuesday, October 20th. Anyone from anywhere in the world can participate for free (as long as they have an Internet connection)! Links for the conference are below. There are 50 sessions and 3 keynotes, and the schedule with connecting information is listed for time zones throughout the world.

Everyone is invited to participate in the conference, designed to foster collaboration and knowledge sharing among information professionals worldwide.

The School of Information at San José State University is the founding conference sponsor. Register as a member of the Library 2.0 network to be kept informed of future events!

Quick Links:
ScheduleStrandsPromotion All of the session and keynote recordings from previous years are available under the Archives tab above and the Library 2.0 YouTube channel has the past four year…
Post a Comment
Read more

In May 2014, the NYTimes wrote about the Supreme Court continuing to edit opinions after release. Earlier this week, a NYTimes article noted that SCOTUS is now disclosing after-the-fact changes to its opinions.

The move on editing is a major development. Though changes in the court’s opinions after they are issued are common, the court has only very seldom acknowledged them. Many of the changes fix spelling or factual errors. Others are more substantial, amending or withdrawing legal conclusions.

Starting this term, a court statement said, “post-release edits to slip opinions on the court’s website will be highlighted and the date they occur will be noted.” The court’s website includes sample opinions to show how all of this will work. “The location of a revision will be highlighted in the opinion,” the statement said. “When a cursor is placed over a highlighted section, a dialogue box will open to show both old and new text.”