The Last of the Free Ranging Library Cats

- July 29, 2016
In what is a sad day for the library-cat profession, it appears that the odds are stacked against them when it comes to future job prospects.

The Chicago Tribune reports that "Stacks" is believed to be the last full-time, free-ranging library cat in Illinois.

As noted, library cats face an uncertain future. Their ranks are down considerably from 2010, when there were at least five library cats statewide. A Tribune search, based on an old master list and a query published in the Illinois Library Association's electronic newsletter, turned up just two full-time feline residents: Stacks, of course, and Newby, a handsome black cat with a dash of white on his chest who resides in the staff offices of the Nippersink Public Library in Richmond.

Librarians point to several factors working against the pint-size literary lions, including concerns about allergies, the digital age pressure to seem "modern" and "relevant," a highly litigious society, even social media, which can amplify the concerns of a small but passionate anti-cat minority.

This will likely end a long-standing tradition, as the post of library cat is often traced to ancient Egypt, where cats protected precious papyrus scrolls from the ravages of hungry rodents. 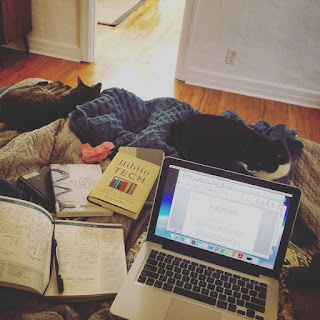 A photo of my "library cats."
They both have honorary JDs & MLIS degrees after
sitting on my papers and laptop through all of those years.
law librarian libraries