- July 17, 2013
There's been a movement toward plain English for years, but some attorneys have not been persuaded to drop legalese -- probably out of tradition. But "the best and most persuasive arguments are those presented in plain English, with well-organized headings and sections, and presented in as few words as possible."


For those attorneys who still think that legalese somehow sets them apart from the rest of society, there are empirical studies that show that judges prefer plain English. The first study dates back to 1986. It was done by Professor Robert W. Benson and Dr. Joan B. Kessler, Esq. The study’s findings are nicely summarized in the final paragraph:

"It appears that lawyers run substantial risks when writing documents in traditional legalese, even when the intended audience for those documents consists entirely of judges and their aides. Lawyers who write in legalese are likely to have their work judged as unpersuasive and substantively weak. Perhaps even more worrisome for these lawyers personally is the finding that their own professional credentials may be judged less credible.”


From an updated study done in 2010 by practicing attorney Sean Flammer, it was found that 64% of judges preferred plain English. 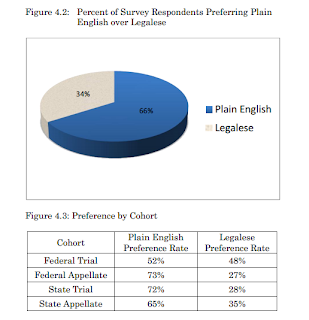 So we have studies that confirm that the plain English movement that started over 30 years ago beats legalese. Of the 34% of judges who preferred legalese in the 2010 Flammer study, I wonder how many of those judges are old timers who hold onto tradition for the sake of tradition? If we were to survey the judges just three years later, I bet that the percentage toward plain English would be even higher. The forefathers of the plain English movement should be proud. They have promoted plain English and persuaded the legal field to adopt a new way of writing for the betterment of the entire profession. For the legalese tradition that has been in place for hundreds of years to be replaced by plain English in a matter of a generation is pretty impressive.

Findlaw -- Studies Show Judges Hate Legalese; So Do We