The Librarians' "Crusade" for Academic Freedom 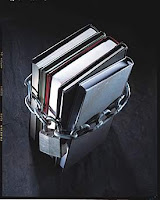 After recent events at the University of California - Davis, there's been an uproar surrounding college librarians and academic freedom. The uproar was created after a librarian in the UC system used a title for her presentation that an administrator colleague thought might be offensive: "Copy cataloging gets some respect from administrators."

Inspired in part by [the librarian's] cautionary tale, the [UC-Davis] union sought to include a provision in the new contract clarifying that librarians have academic freedom. Union representatives proposed in late April a guarantee of academic freedom to all librarians so that they could fulfill responsibilities for teaching, scholarship, and research.

After the UC system said that the policies on academic freedom do not extend to librarians, [t]he librarians’ [ensuing] crusade has drawn support in the form of a petition signed by about 650 people, including librarians and faculty members from Skidmore College, in New York, to the University of Oregon to the University of West Georgia.

It's heartwarming to see the strong support for the librarians across the country with the strongest support arguably coming from the chair of the American Association of University Professors’ committee on academic freedom and tenure. Hank Reichman wrote for the AAUP’s Academe blog that the UC negotiators "are wrong" to say their position [against academic freedom for librarians] aligns with the AAUP’s.

The AAUP has previously said librarians and faculty members have the same professional concerns, calling academic freedom "indispensable" to librarians because they ensure the availability of information to teachers and students. "The language proposed by UC-AFT is, therefore, totally consistent with long-accepted principles in the academic and library communities, including with the principles of academic freedom as defined for over a century by the AAUP," he wrote. "The University of California is well advised to accept this sensible proposal."

In a past post, I discussed law librarian status and academic freedom. In that post, I mentioned that our lack of academic freedom is particularly difficult because we are not protected to fully engage with and advance our field. A field that is wrongly pegged as supplementary or secondary.

In the era of big-data algorithms with no accountability and the "fake news" phenomenon, librarians must tackle tough, controversial subjects that affect information. This aligns with Reichman's assessment that academic freedom is indispensable to librarians because we ensure the availability of information to teachers and students.

And while it's absolutely true that we ensure the availability of information to teachers and students, we're also engaged in our own niche field that must have the protection of academic freedom to move forward and engage in meaningful conversations.
academic checks and balances law librarian libraries