Transitioning From Peer to Manager 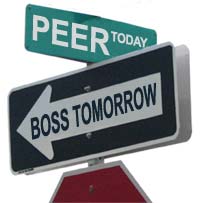 2018 has officially been the year of leadership training.

During each of these wonderful leadership-training events, the speakers all touched on transitioning from peer to manager -- mostly noting that it was often a difficult transition. They were certainly right about that.

Continuing research into the tough transition from peer to manager led me to a 2013 Forbes article titled 8 Tips to Transition from Co-Worker to Manager. This article is particularly helpful for the practical tips it provides.

As noted, making the move from co-worker to department manager can be a tricky transition because, as the new manager, you are responsible for the productivity and results of your department. Oftentimes, former co-workers, either because of jealousy or out of habit, won’t want to treat you as the boss; they may want to continue treating you as one of the group.

Tip 1: Realize that your previous personal relationships with co-workers will need to be moved to a different level because you’re no longer a peer – you are now the person who assigns work, analyzes productivity and provides performance appraisals.

Tip 2: See your HR representative to find out what training and support is available as you take on your new leadership role.

Tip 3: Sit down one-on-one with each person in the department to discuss their feelings about your transition to manager. Talk about the expectations you have of each other and get potential issues out on the table so you can address them.

Tip 4: Remain professional at all times. And, treat each and every employee fairly and with respect.

Tip 5: Eliminate any water-cooler or break-room gossip and venting sessions with employees.

Tip 7: Ensure that everyone on the team understands your new role as their manager and the responsibilities that are expected of you as well as the role each of them plays in the success (or failure) of the department.

While I continue to learn and employ various leadership theories; after 6 months in my new role, I'd say these tips for an early and effective transition are right on.
AALL administration law librarian leadership