- January 11, 2018
A colleague sent me the following image of Samuel Williston with the research -- drafts and notes -- for his venerable treatise: 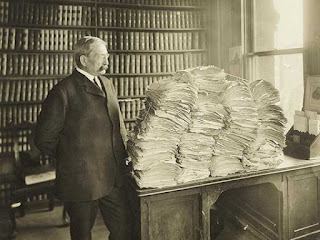 This is an impressive image of a labor of love. We'll likely never see anything like it again (nor should we, poor trees). Just imagine the countless hours of toiling in the books that Williston (or his research assistants, as it were) undertook to develop the preeminent contracts treatise. This was certainly a golden age for the print-lined walls of the law library.

It's interesting to look at the tangible work product and understand the research behind it and compare it to what we're likely to see today. While we won't see piles of papers, we'll see documents stored in electronic folders. And while we won't, generally, toil in books, we are still toiling in electronic databases doing the creative analysis required of effective legal research.

After seeing the image, I was intrigued to read the accompanying article in Harvard Magazine assuming that it would be about his research and writing process. I was surprised to find that it was about Williston's resilience in overcoming mental illness.

In his mid thirties, he suffered a nervous breakdown that caused him to stop work for years at a time. Diagnosed with “neurasthenia,” he took extended leaves of absence, attending different sanitariums in search of a cure. Eventually, with the help of what we would today recognize as a combination of drug and cognitive therapy, he worked his way to a kind of recovery that allowed him to pursue his enormously productive career.
. . .
Nonetheless, he understood that his breakdown had been a central event in his life and hoped his recovery might show those with similar problems that “some achievement may still be possible after years of incapacity.” His sense of having overcome a potentially career-ending illness probably contributed to the serenity and compassion that people so often remarked on.

It didn't surprise me that Williston suffered from mental illness in the legal profession (since it's so pervasive). What did surprise me is how candid he was at a time when it likely would have been considered a weakness. It's so nice that he was able to reflect on his illness and develop a compassion for others.

With Williston in mind, it's refreshing to see the changes that are taking place in the legal profession today when it comes to mental health and wellness. At my own institution in the last few years, we've seen a greater student emphasis on mental health and wellness. This bodes well for the future of the profession in terms of individual wellness, as well as compassion for others.