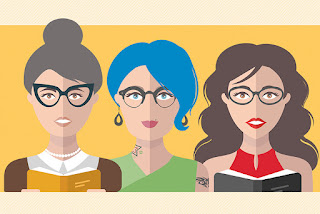 As noted in the article, the stereotypes do not fall far from history.
Early American librarians almost exclusively came from New England gentility or, by virtue of their educational background and politics, became accepted as part of that class. They believed in the possibilities of moral uplift for the poor and uneducated and saw themselves as the perfect missionaries for the job.

As gentility was abandoned by young men, it became more identified both with old-­fashioned values and with femininity. Women were looked to as keepers of the culture, and they took that responsibility seriously. As genteel society became almost entirely embodied by the “lady,” the genteel lady became “a new social type—a curious transitional blend of feminist and domestic queen.” So, as librarianship resisted the hypermasculine modern consumerist culture, it also became a natural harbor for the newly adventurous modern woman.

This shift is when we went from the male curmudgeon stereotype to his prudish sister.

Many newer librarians take very seriously the tenet of providing access to information, following the belief that in informed citizenry makes a robust democracy. This has lead to newer stereotypes such as the superhero librarian, and the hipster or tattooed librarian.

As the author notes:
Reviewing the history of librarianship and librarian stereotypes helps us to remember that libraries reside fully within current cultural climates. When we address library stereotypes at face value without taking into account the broader social realities that not only make them possible but also reinforce their potency, we put ourselves in a quixotic situation.