State Fines For Texting While Driving

- October 31, 2013
I'd wager that most people have sent a quick text while driving or have been the remote texter who texts a friend while the friend is driving. While these acts are common, it is obviously risky, and the various states are trying to discourage texting while driving with steep fines.

Lifehacker posted the following map of the states with each state's fine for texting while driving: 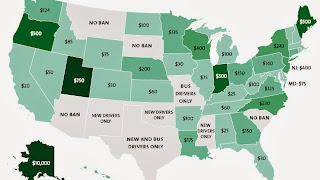 "Alaska has the strongest penalty: Up to $10,000 and a year in prison for the first offense. California has the smallest minimium fine—only $20 per offense. Four states: Arizona, Montana, South Dakota, and South Carolina, have no bans or penalties for texting while driving whatsoever. The national median is $100, and many states scale the dollar amounts and penalties up from there."

These are fines for driving while texting, and New Jersey recently upped the ante when "a New Jersey appeals court held that a remote texter can be held liable to third parties for injuries caused when the distracted driver has an accident. However, that is only true if the individual sending the texts from another location knew they were being viewed by the recipient as he or she was driving."

Just don't do it.